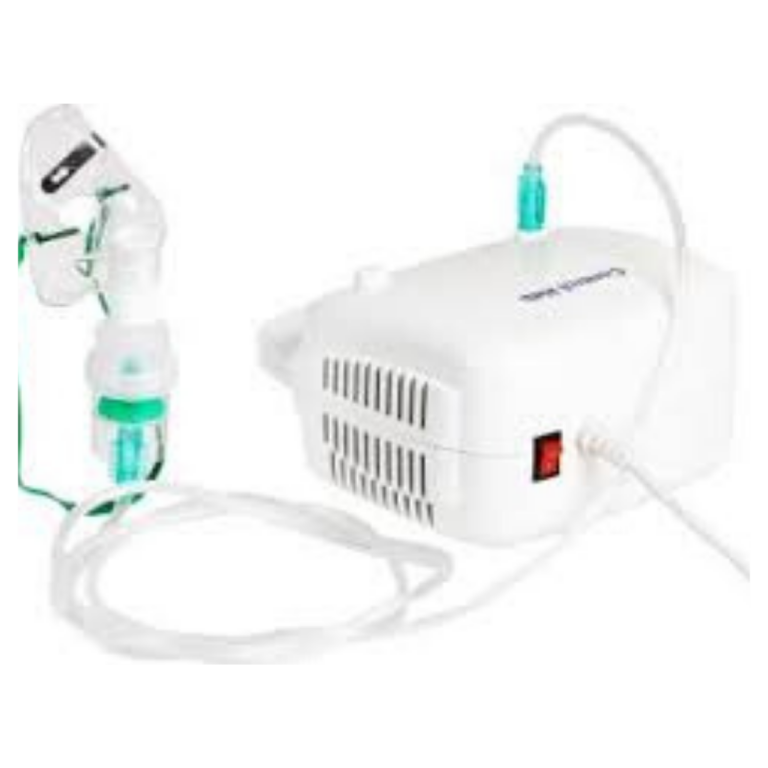 A nebulizer machine is a piece of medical equipment used to administer medication in the form of a mist inhaled to treat the lungs. It can be purchased with or without a prescription. Nebulizers, which come in either electric or battery-run versions, are commonly used for the treatment of the following respiratory diseases among other respiratory conditions;

The first "powered" or pressurized inhaler was invented in France by Sales-Girons in 1858. This device used pressure to atomize the liquid medication. The pump handle is operated like a bicycle pump. When the pump is pulled up, it draws liquid from the reservoir, and upon the force of the user's hand, the liquid is pressurized through an atomizer, to be sprayed out for inhalation near the user's mouth.

In 1864, the first steam-driven nebulizer was invented in Germany. This inhaler, known as "Siegle's steam spray inhaler", used the Venturi principle to atomize liquid medication, and this was the very beginning of nebulizer therapy.

The first pneumatic nebulizer fed from an electrically driven gas (air) compressor was invented in the 1930s and called a Pneumostat.

In 1964, a new type of electronic nebulizer was introduced: the "ultrasonic wave nebulizer". Today the nebulizing technology is not only used for medical purposes but also in humidifiers, to spray out water aerosols to moisten dry air in buildings.

Some of the first models of electronic cigarettes featured an ultrasonic wave nebulizer in combination with a vaporizer. The most common type of electronic cigarettes currently sold, however, omit the ultrasonic wave nebulizer, as it was not found to be efficient enough for this kind of device. Instead, electronic cigarettes now use an electric vaporizer, either in direct contact with the absorbent material in the "impregnated atomizer," or in combination with the nebulization technology related to a "spraying jet atomizer" (in the form of liquid droplets being out-sprayed by a high-speed air stream, that passes through some small venturi injection channels, drilled in a material absorbed with nicotine liquid). 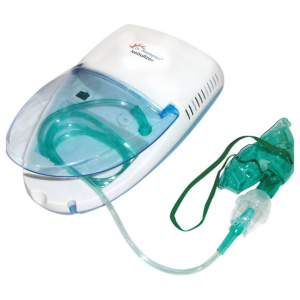 This Is How The Nebulizer Works

For asthma patients, you might have heard about this respiratory device and probably wondering how it really works. Well, let's get to it, shall we?

First of all, nebulizers are typically worn for very brief periods during the day. When a doctor prescribes it for your treatment, he will explain how to go about it because they vary in versions. But despite that, they all aim to achieve the same goal which is to turn liquid medicine into a very fine vapor that you can inhale through a face mask or mouthpiece. Some of the medications used include ipratropium, albuterol, formoterol and budesonide. A nebulizer has a chamber below the mask and headgear that holds liquid medication. It uses oxygen, compressed air or ultrasonic power to break up solutions and suspensions into small aerosol droplets that are inhaled from the mouthpiece of the device. For those asking, an aerosol is a mixture of gas and solid or liquid particles.

Steps to take while using a nebulizer.

2. Add your medicine to the medicine cup, according to the doctor’s prescription.

4. Attach the tubing to the machine, according to the instructions.

5. Turn your nebulizer on; they can be battery- or electrically powered.

6. While using the nebulizer, hold the mouthpiece and medicine cup upright to help deliver all the medication.

7. Take slow, deep breaths through the mouthpiece and inhale all the medicine.

Jet nebulizer
These are the most commonly used nebulizers, also called "atomizers". Jet nebulizers are connected by tubing to a supply of compressed gas, usually compressed air or oxygen to flow at high velocity through a liquid medicine to turn it into an aerosol that is inhaled by the patient. They are commonly used in hospitals for patients who have difficulty using inhalers, such as in serious cases of respiratory disease, or severe asthma attacks.[11] The main advantage of the jet nebulizer is related to its Atomizers have low operational cost.

Soft mist inhaler
The medical company Boehringer Ingelheim also invented a new device named Respimat Soft Mist Inhaler in 1997. This new technology provides a metered dose to the user, as the liquid bottom of the inhaler is rotated clockwise 180 degrees by hand, adding a build up tension into a spring around the flexible liquid container. When the user activates the bottom of the inhaler, the energy from the spring is released and imposes pressure on the flexible liquid container, causing liquid to spray out of 2 nozzles, thus forming a soft mist to be inhaled. The device features no gas propellant and no need for battery/power to operate. Due to the very low velocity of the mist, the Soft Mist Inhaler in fact has a higher efficiency compared to a conventional pMDI.

Vibrating mesh technology
A new significant innovation was made in the nebulizer market around 2005, with creation of the ultrasonic Vibrating Mesh Technology (VMT). With this technology a mesh/membrane with 1000–7000 laser drilled holes vibrates at the top of the liquid reservoir, and thereby pressures out a mist of very fine droplets through the holes. This technology is more efficient than having a vibrating piezoelectric element at the bottom of the liquid reservoir, and thereby shorter treatment times are also achieved.

We have had a few clients inquiring if there's a difference between a nebulizer machine, an inhaler and a CPAP machine.

Differences between nebulizers and inhalers

Nebulizers and inhalers have some similarities — for example, they both deliver medicine directly into the lungs to help make breathing easier.  There are two types of inhalers: a metered-dose inhaler (MDI) and a dry-powder inhaler.

An MDI is the most common type of inhaler. Using one involves inhaling a premeasured amount of medicine through a mouthpiece. Some inhalers have a spacer, which makes it easier to inhale the medication.

A dry-powder inhaler is similar, but the medication is in powder form inside the inhaler. It requires the user to take a deep, fast breath, which pulls the powdered medicine deep into the lungs.

Both types require the ability to inhale the medicine deep within the lungs. Some children and people with severe respiratory diseases may find this problematic. Nebulizers tend to be a little easier to use, in terms of delivering the medicine. However, a nebulizer may take up to 10 minutes to dispense the medication, and the user needs to sit still until they have inhaled all of it, which may be hard for a young child. Also, nebulizers are not as portable; they can be difficult to carry around, while inhalers are typically smaller and more suitable for traveling.

Difference Between Nebulizers And CPAP Machines

Doctors can prescribe CPAP therapy to patients with sleep apnea so as t0 treat them and it makes sure that they are able to acquire oxygen while sleeping during the night. However, in addition to this therapy, they look for ways to alleviate any underlying conditions which may be contributing to the sleep apnea in their patient. Nebulizers may be used as part of a sleep apnea treatment plan when the patient is suffering from certain respiratory disorder, such as chronic obstructive pulmonary disease (COPD), cystic fibrosis or asthma. The nebulizer delivers medication in mist form so that it can be inhaled directly into the lungs. When including this step before using a CPAP machine, the patient may be able to breathe better throughout the night and feel more comfortable using their CPAP therapy.

As we know now, the nebulizer is worn during the day which is different from CPAP machines which are worn overnight to help treat troubled breathing or snoring. Also, nebulizers are at least ten times cheaper as compared to CPAP machines so one would think buying it is a budgeting strategy but sadly, it is not. When you get a nebulizer instead of a CPAP machine it means you will not be able to breathe easily all night and could suffocate yourself in your sleep. You will not be able to atomize your new medication and could end up in the hospital or worse. Make sure to clarify which machine you need with your doctor before making your purchase.

In conclusion, we can see that nebulizers don’t replace CPAP machines, but they can help make the treatment more effective. We hope that this will help you decide what suits you best when making a purchase.

All about a nebulizer

Share your comments below. Looking forward to your thoughts and experiences with the nebulizers!